Just how good are the Rebels’ “Nasty Wide Outs”

Just as they were the talk of the offseason, the Ole Miss “Nasty Wide Outs” continue to garner attention now that fall camp has begun. They are the most recognizable facet of Ole Miss football. So, just how good are they?

The Rebels’ receiving corps, also known as the “Nasty Wide Outs,” is one of the most popular topics of conversation heading into the 2018 football season. For quite some time now the wide receiver position at Ole Miss has been consistently loaded with outstanding talent, earning the school the title of “Wide Receiver U.”

Guys like Donte Moncrief, Laquon Treadwell, Cody Core, Evan Engram, Damore’ea Stringfellow, and Quincy Adeboyejo are some of the star receivers in the last five years who have donned the red and blue for the Rebels and are currently playing in the NFL.

These Rebel greats paved the way for the latest generation of talent: A.J. Brown, D.K. Metcalf, and DaMarkus Lodge, to name a few. All these receivers have become synonymous with Ole Miss’ fast-paced, high-scoring, record-setting offense that has torched enemy DB’s for the last few years.

The hype is monumental, so just how good are the “Nasty Wideouts?” Let’s begin to answer that question by taking a look at the No. 1 receiver in the conference, if not the nation.

Going into the 2019 NFL Draft, ESPN’s Mel Kiper Jr. has A.J. Brown listed as the 4th-best overall prospect and top offensive player at any position. Last season the Starkville native took home the prestigious Conerly Award, given annually to the best player in Mississippi. He also added All-American and All-SEC honors.

So how did this Rebel climb all the way to the top in just two seasons at the NCAA’s least-favorite school?

Brown snagged 75 passes for 1,252 yards and 11 TDs in 2017. Standing at 6-feet-1 inches tall and weighing 225 pounds, he is a stocky, physical receiver who wins one-on-one battles with agility, strength and a very high football IQ.

And….moves like this are what make Brown so special with the ball in his hands.

He just makes it look so easy.

A year ago, Brown dominated the Rebels’ opponents. Six different times he reached 100 total receiving yards in a single game, and in one game he reached the 200-yard mark. Four separate times in 2017 he caught two touchdowns in a single game. And in two of his games last season, he finished with 10+ receptions.

A.J. Brown finds himself all over the leaderboard among returning SEC WRs pic.twitter.com/dr9VMCcahZ

Going into 2018 it should surprise no one if quarterback Jordan Ta’amu targets Brown 15+ times a night. He’s just that good at getting separation and making opponents pay when he has the ball in his hands–and after he catches the ball, Brown is very difficult to stop. In 2017 he forced 23 missed tackles en route to amassing 674 yards after the catch—second-most amongst returning wide receivers.

We could go on all day about the No. 1 offensive player in the country for the 2019 NFL Draft, but let’s not forget the other dangerous weapons who join him to comprise the Nasty Wide Outs.

Coming out of high school, Oxford native D.K. Metcalf was an Army All-American and listed as the 16th-best wide receiver in the nation, according to 247Sports.com. The son of Rebel great Terrence Metcalf, D.K. was expected to don a Rebels’ uniform long before he signed his National Letter of Intent (NLI) in 2016.

Standing tall at 6’4,”  225-lbs, Metcalf is the ‘prototypical’ college and NFL wide receiver. His size gives him a good 4-5 inches on the majority of collegiate DB’s, and his sheer strength beats the other half of corners and safeties. 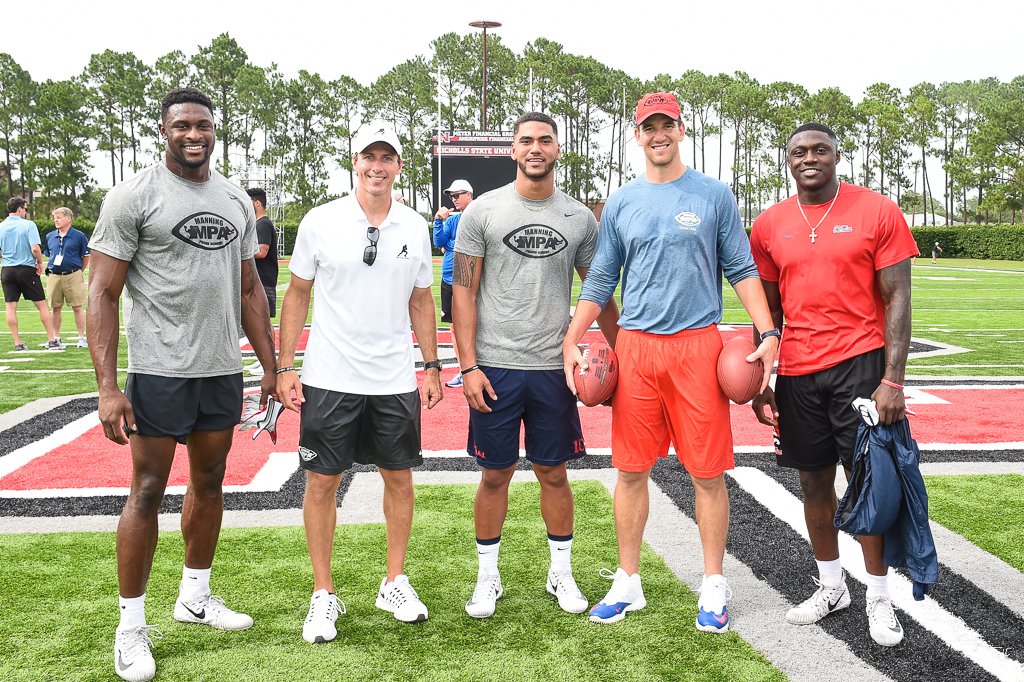 To many, Metcalf looks and plays like NFL great, Calvin Johnson; He is big, strong and has good breakaway speed. Of all his attributes, perhaps the best is his ability to find the ball in the air and use his big frame to go get it at its highest point.

Defenders have fits trying to get the ball away from Metcalf, and it’s easy to see why. He’s put on roughly 20 pounds of muscle since he arrived at Ole Miss, and one would be hard-pressed to believe that that trend won’t continue as he develops as a player.

This season, we see that number of targets, yards, and touchdowns increasing further, since 2017 was his first full collegiate season. The sky is the limit for a player with D.K.’s build and talent.

Last season Lodge snagged 41 passes for 698 yards and 7 TDs. Lodge is a veteran hybrid of both Metcalf and Brown. He has lined up in both the slot and on the perimeter during his career, and he has the skills to excel in both spots. Lodge has breakaway speed for a deep ball, and also is quick and shifty enough to maneuver the slot.

He is a threat to the opponent any time he’s on the field. Though many teams may focus on Brown and Metcalf, they do so to their own detriment. With the attention often shifted away from him, DaMarkus is able to make teams pay. With the spotlight on Brown and Metcalf this season, Lodge is sure to shine and make teams regret it when they focus too heavily on No. 1 or No. 14.

A.J., D.K. and DaMarkus comprise arguably the best receiving group in the nation this season. (Using the word “arguably” is really only an attempt to maintain some semblance of professionalism.) They are the best group in the country at their position, and it’s easy to back that argument. The group combined for 25 TDs a year ago, giving Ole Miss the only returning trio of wideouts that each had 7+ TDs last season.

The work of Brown, Metcalf, and Lodge, alone, accounted for almost 47% of the Rebels’ offense a year ago. They make up an almost impossible-to-guard trio, a three-headed monster that forces teams to leave at least one open at all times. If you bring a safety down to help with Brown and Lodge, you give Metcalf room to run over the top. If you back up and force a pass underneath, you give Ta’amu multiple options.

There is just no real way to ensure coverage on all three, at all times. Tight end Dawson Knox is also healthy and expected to figure prominently in offensive coordinator Phil Longo’s explosive offense, either coming out of the backfield or coming off the line of scrimmage.

Having so many talented receivers is a luxury that no other team in college football enjoys–and it’s one that has helped the Rebels’ offense excel. Last season, Ole Miss gained an average of 462 yards per game, earning the Rebels a top-10 ranked offense in Power 5 conferences.

This season could see even more production, as these receivers have had another year of development and more time with their quarterback. Records are sure to be broken, and the Rebels offense is sure to be a force to be reckoned with in the SEC.

The future is bright for the Nasty Wide Outs

In addition to Brown, Metcalf, and Lodge, the Nasty Wide Outs also count sophomore wide receiver Braylon Sanders as a member. Sanders is preparing to follow in the footsteps of his older, more famous teammates. He impressed wide receivers coach Jacob Peeler last season, earning playing time as a freshman, and looks to contribute even more this season.

Additionally, the Rebels expect big things from three freshmen receivers–Demarcus Gregory, Elijah Moore, and Miles Battle, who have all been working hard in fall camp.

The 2018 season has Rebel fans excited, and the continuing tradition of excellence from the Nasty Wide Outs is a huge reason why.

Jake, a 2021 graduate of Ole Miss with a degree in Integrated Marketing and Communications, is from Nashville, TN. Along with his work at The Rebel Walk, Jake hosts “The Flagship Football Show” podcast. He’s also a huge fan of the Rebels, Titans, Predators, and Braves.